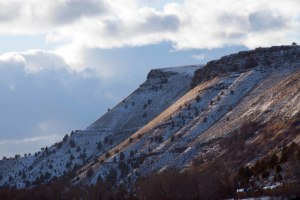 Tracy Moss, 60, a longtime resident of Grant County, died Thursday, November 11, 2021 at his home surrounded by friends and family. A Celebration of Life and potluck reception with Prime Rib provided by Russells Customs Meats will be held December 11th ~ 11 a.m.  at the John Day Pavilion at the Grant County Fairgrounds.

Tracy was born August 16, 1961 in La Grande, OR to parents Harold and Margaret Moss. He was raised and educated in La Grande.  He graduated from La Grande High school in 1981.

Tracy had dreams of being a football player.   Sadly, those dreams were dashed after being shot by accident in 1977. A bullet was lodged in his spine to remain there the rest of his life. The infection in his blood from the bullet would be a life long battle. After being read his rights of passage the day after his injury, Tracy opened his eyes, looked at his mom and said, “I’m not going to die”. After three months in the hospital and 8 major surgeries, he was released and his dad took him out to get his driving permit, to celebrate. Tracy never knew the word 'quit'.

In 1981 for 4 years, Tracy worked with his Uncle Don and Aunt Bonnie Lambert in Meridian Idaho at Lamberts Mobil Butchering learning the trade and working around the farm in Meridian, Idaho.  He then moved to Baker City in 1985 and began working for Russell and Gloria Bratcher at Russell’s Custom Meats, where he continued to flourish in the meat processing trade.  With the support of Russell and Gloria, he began to compete in meat processing competitions with the Northwest Meat Processors Association, winning several awards through the years.

On March 2nd of 1986, Tracy met Kathy Fox Saul in Baker City at the Donut factory. He had ordered a maple bar and diet coke at 6:30 a.m.  Kathy said to Tracy, “you should have milk or coffee instead of a soda”. He sat down with his hunting partner and said,” I could go out with that girl”. Three weeks later, he officially met Kathy at Russell’s Custom Meats, where he stood in the freezer for almost 20 minutes trying to figure out what to say. Eventually Gloria Bratcher coaxed him out, all he said was “Hi, I’m Tracy.” Kathy proceeded to do the rest of the talking, which included a date going to dance class learning two step and western swing.  When Kathy left, Tracy looked at Gloria and said, “Well that was easy.” They were married that fall on September 21, 1986.

Russell and Gloria built a new Russell’s Custom Meats shop in Canyon City, OR. Tracy and Kathy moved to Grant County in 1989. As he drove off of Dixie into the vast view of the Strawberries, Tracy told Kathy he was home.

Tracy worked for Chester’s Thriftway, Gardners and helped Mike Slinkard begin his adventure with Winners Choice Custom Bowstrings. He was there for five years, where again Tracy worked diligently to master the art of making top notch quality Archery Bowstrings. According to Mike “Tracy was the World’s best String Builder.”

Tracy never ventured far from meat processing and consistently cut peoples game on the side. One day Tracy asked Kathy if she wanted to buy Russell’s from Jana and Del Woodcock.  On January 1st, 2007 for $25.00 down, Kathy and Tracy began a new adventure as business owners, and dedicated their life to supplying quality meat for families around the state.

He dedicated his time to teaching those who wanted to learn how to take pride in their work, he believed in tough love, because that was all he knew. He donated meat to food banks, to help with food drives, and donated meat processing to organizations for youth hunts for the kids who had terminal illness.

Tracy was an avid hunter and a true marksman. He mastered shooting guns then moved right into archery where the hunt was up close and personal. He loved to be out in the wilderness and among Mother Nature and a few good friends.

Since children were not in their future, Tracy and Kathy took in different types of hard luck animals, including a potbellied Pig, McGiver they had for 18 years. They also enjoyed supporting kids around the community in 4-H, FFA.

A quiet man, he was always in the background, driven to do his best and made sure his employees did the same. His heart was as big and tender for animals and kids around him. All he ever asked was for” honesty” and “do what you say you are going to do.” He didn’t have time for small talk, for it seemed a waste of time.

His love for his wife Kathy was his ultimate goal, giving her free rein to chase her dreams and pursue her passions. “I don’t ever want you to have a bucket list…” and he meant it.

Tracy was preceded in death by his father Harold and Mother Margaret Moss who passed away just 2 days after Tracy.

For those who would like to make a memorial donation in honor Tracy the family suggest Grant Union FFA,  or Prairie City FFA through Tami’s Pine Valley Funeral Home and Cremation Services PO Box 543 Halfway, Oregon 97834. Online condolences can be shared at www.tamispinevalleyfuneralhome.com