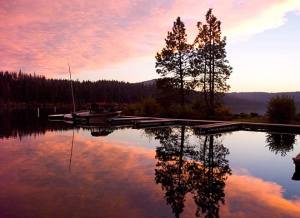 Richard J. Rudolph, 69, of Baker City, passed away at his home in the wee hours of the morning on Wednesday, April 29, 2020 with his brother Tony and his feline companion Roc by his side after a valiant battle with mesothelioma.Per his request there will be no funeral service and his ashes will be placed at his favorite fishing spot.

Richard was born Feb. 6, 1951 in Albany, OR to parents Betty and Kenneth Rudolph. He was the 4th oldest of 11 children. Raised in Albany, Richard attended elementary school at St. Mary’s Catholic School, then went on to Albany Union High School and graduated in 1969.  Later, he studied waste water treatment at Linn Benton Community College for 2 years.  When he was 48, he attended Clackamas Community College where he studied Liberal Arts for 2 years.

He married Beth Vongchanglor on Dec. 9, 1978 in Vancouver, WA. They later divorced in February of 1985. Even though he never remarried or had any children, he loved all of his many nieces and nephews.

Richard lived in various places during his life, Calita California, Appleton Wisconsin, Flagstaff Arizona, Vancouver Washington, Portland, Tigard, Aurora and Canby Oregon before settling in Baker City in 2001. One particular accomplishment that he was the most proud of was designing and building his own house here in Baker City, with a little help from his friends.

His work history includes being a production manager for Timjoist, Inc. in Tualatin, OR  for about 5 years, working for The Coca-Cola Company in Wilsonville, OR where he was the production manager there for 10 years. After he moved to Baker City, he was hired on as a handyman in 2002 for Nelson Real Estate. He enjoyed that job for 6 years and the management and staff loved him.

He was an avid sports fan and cheered on the Portland Trailblazers, Seattle Seahawks, Seattle Mariners and the Oregon State Beavers.  He loved the outdoors, especially in the fall and enjoyed fishing, family gatherings, drawing, painting, gardening, writing and music.

Richard lived by the Golden Rule and enjoyed helping people. After being diagnosed with Parkinson’s disease in 2000, Richard later found out that he was a good candidate for Deep Brain Stimulation therapy or DBS. He had the procedure and it helped him so much that he volunteered to be an advocate for those with Parkinson’s who had questions about his experience. He called his endeavor Movers & Shakers. He also enjoyed Tai Chi classes at Community Connection where he greeted everyone with a smile and loved reaching out to new members and helping them learn the moves.

He was preceded in death by his parents, brothers Tom Fulcer, Mick and Gerry Rudolph, sisters Patricia “Trish” Stoelting and LaVonna “Vonnie” McPherson.

For those who would like to make a memorial donation in memory of Richard, the family suggests Community Connection (provides meals on wheels, food bank) or Best Friends (animal care and rescue) through Tami's Pine Valley Funeral Home & Cremation Services PO Box 543 Halfway, Oregon 97834.  Online condolences may be shared at www.tamispinevalleyfuneralhome.com

You can still show your support by sending flowers directly to the family, or by planting a memorial tree in the memory of Richard Rudolph
Share a memory
© 2021 Tami's Pine Valley Funeral Home and Cremation Services. All Rights Reserved. Funeral Home website by CFS & TA | Terms of Use | Privacy Policy