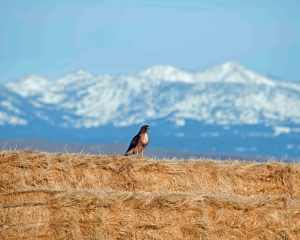 Paul Bennett, 85, of Baker City, passed away peacefully at his home surrounded by his son and grandkids, Friday, October 2, 2020.  A celebration of his life will be held at a later date.

Paul was born in La Grande, OR January 31, 1935.  The majority of his youth was spent in Oregon City where he attended a variety of schools.  He completed his education early with a diploma from the 8th grade which he received in Aurora, OR.  Due to family circumstances he was unable to continue his education, as he was needed to provide for his family.

Paul joined the United States Air Force in 1952.  He was stationed in Iceland during the Korean Conflict. In his free time he pitched and played softball and joined a band where he played the spoons.

In 1955, Paul married Patricia Meyers in Sacramento, CA.  They later divorced.  November, 29, 1969 he found love again when he married Alice Horsch in Vancouver, WA. They too divorced.

Following his 4 years in the Air Force, Paul worked for Aerojet Gen. Corporation in Sacramento, CA, Boeing in Portland, OR and Western electric in Vancouver, WA.  He then began his own company “N.W. Salvage” doing demolition and wrecking for 45 years.  He retired at 80 years old.

Paul enjoyed fishing, gardening and listening to listening to local bands.  His hobby was transporting entertainers back and forth from the airport to different venues around the state of Oregon and Washington.  During that time he acquired about 400 autographed photographs of the performers he transported. Many of these pictures hung on the wall of his home and he loved to tell the stories of the stars and the friends he made along the way.

Paul adored his little Havanese dog Charlie, they were always together these past 14 years.  Paul lived by the philosophy of “do unto others as you wish to be done unto you.” Paul will be remembered for his generosity to others and always paying it forward.

For those who would like to make a donation in memory of Paul the family suggests either Community Connections or the American Cancer Society through Tami’s Pine Valley Funeral Home and Cremation Services PO Box 543 Halfway, Oregon 97834.  Online condolences can be shared at www.tamispinevalleyfuneralhome.com

To send flowers to the family or plant a tree in memory of Paul Bennett, please visit our floral store.

You can still show your support by sending flowers directly to the family, or by planting a memorial tree in the memory of Paul Bennett