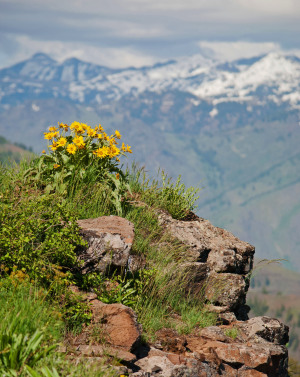 Mark Halley (age 69) was born in Baker City, OR in 1949 to Ronald & Grace Margaret Halley.  He was the youngest of three boys.  Mark grew up in Richland, OR working on the family’s farm.  When he was finished with his chores, he loved to spend time hunting, fishing and riding horses with his older brothers and best friends.  Mark attended elementary school in Richland and graduated from Pine Eagle High School in 1968.  After high school, Mark attended Oregon State University.  In 1971, he took a break from college when he was drafted by the US Army and sent to Berlin, Germany.  He married Gail, his high school sweetheart, while stationed in Berlin.  After the Army, he returned to OSU and earned his BS in Forest Engineering.  They started a family and moved to Canada where he worked as a Forestry Manager for 13 years.  In 1989, Mark and his family returned to Richland to start a ranch.  In 1996, he and Gail relocated to Sisters, OR, however, Mark continued to work in Cornucopia for Wilderness Outfitters.

Mark loved horseback riding and being outdoors.   As far as he was concerned, anything could be fixed with a horseback ride in the mountains or a day spent working cattle.  Sometimes those days didn’t go according to plan but he usually escaped unscathed and had a hilarious story to share.  As an avid Oregon history buff, he enjoyed exploring and reading about forgotten towns and areas.  Mark was hard-working with a great sense of humor.  He will be remembered for his friendliness and amiability.

Mark is preceded in death by his beloved son, Matthew; his parents Ronald and Grace Margaret and his two older brothers, Ronnie and Greg.

Unfortunately, Mark used up the last of his nine lives (battling cancer) on April 10, 2019.  May he find peace on his new trail.

A Graveside Service  with Military Honors will be held on Friday, May 17, 2019 ~ 11 a.m. at Eagle Valley Cemetery in Richland, Oregon.  Friends are invited to join the family for a potluck reception immediately following the service at the New Bridge Grange.  For those who would like to make a memorial donation in memory of Mark, the family suggests the Eagle Valley Ambulance defibrillator fund through Tami's Pine Valley Funeral Home & Cremation Services PO Box 543 Halfway, Oregon 97834.  On line condolences may be shared at www.tamispinevalleyfuneralhome.com