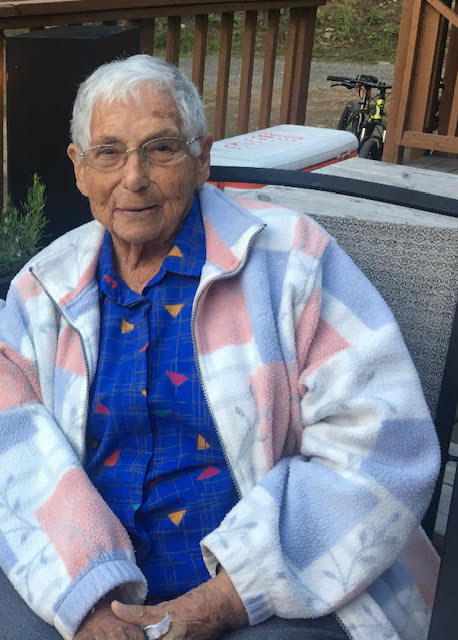 Louetta Stutzman, 92, of Halfway, Oregon, passed away Saturday, April 10th, 2021, in Boise, Idaho.  A service will be held at a later date at the Filer Cemetery in Filer, Idaho.

Louetta Faye Phinney was born in Appleton City, Missouri on December 5, 1928 to Ira Phinney and Freeda Murrow. Louetta had no siblings, but had many cousins and aunts, and loved when they got together on her grandparent’s farm. At the age of nine, Louetta’s mother passed away. Since her father had to travel for work, Louetta lived on her grandparents farm, and attended a small country school. A matter of fact, the school was so small, that Louetta would always laugh and say I was related to all my classmates one way or another. At the age of fourteen, Louetta moved back to Appleton City Missouri and continued her education and would later receive her diploma at the Appleton High School. After finishing her education, Louetta moved to Oklahoma, and stayed there for a while and worked as a waitress. After Oklahoma, Louetta decided to move to Idaho where her father lived. While in Idaho, Louetta met Glenn Stutzman. On October 6th, 1951, 5 weeks after meeting each other, Louetta and Glenn married. When people would ask Louetta why they married so fast, she would say, “Glenn’s birthday was in October, and he didn’t want to be another year older without being married to me.” Soon after, they welcomed their first son, Ira Stutzman in July 1952. Their family would later be completed with the arrival of their second son, Rodney Stutzman, in March 1956. Louetta and Glenn worked hard and taught their boys the quality of having a good work ethic and helping others out when needed.

After their retirement, they moved to Gibsonville, Idaho. During this time, they loved to travel, play card games, and most of all be with their family. They would stay in Gibsonville and enjoy the beautiful mountain town, until 2004 when they moved to Halfway, Oregon to be closer to their son Ira and his family. From the beginning, Louetta made friends in Halfway. She worked at Jacobs Dream, a local shop, and would always greet customers with a friendly and helpful smile. Then again if she had to, she could put you in your place with that spunky attitude she had. She also did activities around town whether it be volunteering or going to lunch with her friends. She was an amazing cook, quilter, crochetier, and sewer. She continued to live in Halfway after Glenn’s death in 2011. She was always involved in her great grandchildren’s lives. She could be in the stands cheering for them during a sporting event or teaching them how to cook. Whatever it was, she was there and made it known to them how much she loved and cared for all of them. She was a wonderful wife, mother, grandmother, and great grandmother. She will be missed every day, but will forever be in our hearts.

She was proceeded in death by her husband, Glenn, her mother, Freeda, and father, Ira,

We love you Grandma, and we know you are watching over us.

For those who would like to make a memorial donation in memory of Louetta, the family suggests the Halfway-Oxbow Ambulance Service through Tami’s Pine Valley Funeral Home & Cremation Services PO Box 543 Halfway, Oregon 97834.  Online condolences may be shared at www.tamispinevalleyfuneralhome.com

Plant a tree in memory of Louetta by clicking here.
To send flowers to Louetta's family, please visit our floral store.

A service summary is not available

Plant a tree in memory of Louetta
An environmentally-friendly option

Plant a tree in memory of Louetta

1 tree planted in memory of Louetta

My sincere condolences to Louetta's family. I lived further down her street and walked past often. She was a dear and sweet woman, and I was always glad to know she had family nearby who saw her often. A good life lived. Hold her close in your hearts and don't let go.

How fortunate all of us were to have known Louetta. She was a great friend to her older peers. Know she is happy to be reunited with Glenn, but her earthly presence will be missed. God's peace to all her family.

A Memorial Tree was planted for Louetta Stutzman

Plant a tree in memory of Louetta