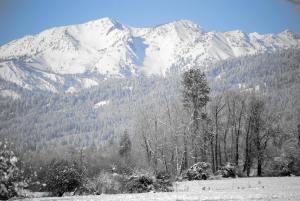 Lorry was born on Jan. 26, 1953 to Elba and Lawrence DelCurto of Halfway. Lorry was the oldest of 3 brothers Tony, Joe, and Tim. He was raised on a small cattle ranch in Pine Valley. He attended Pine Eagle Schools in Halfway and graduated in 1971. He attended Eastern Oregon University with a degree in Bachelor of Science in Business/Economic.

Married: Judy Randall in 1974 divorced in 1984. They raised three children: Chad, Rita and Robert.  Lorry stayed good friends with Judy and her parents Dorothy and John Randall of Richland, Oregon

He fell in love with his best friend, soulmate, and wife Lois Corcoran in 1986.  Married December 31, 1987 in Winnemucca, NV. (Lorry always said it was a good tax write off.)   Lorry helps raise step- daughter Cindy, and step- son Steven.

Lorry lived in Halfway till he was 18. Moved to Baker City in the 70’s to work for Ellingson Lumber Mill from 1969 to 1998 in Halfway and in Baker City. Moved from Baker City to Imbler, in 2004 to be closer to work, Boise Cascade Lumber Company (Stud Mill) from 2002 to 2017.  He was Self-employed for 28 years doing trap cashiering; he owned and operated LJD Trapshooting Cashiering. Lorry and Lois cashiered for ATA and PITA completion shooting for Trap Clubs in Washington, Idaho and Oregon. He always said cashiering was a challenge he like to take on, he would have 40 to 500 shooters to organize for the clubs.

Lorry and Lois were very busy their years together they worked and played hard they had lots and hobbies. They started out by shooting trap. They traveled from Idaho, Washington, Nevada, and Oregon shooting competition shoots and fun shoots.  Lorry was a very good shooter and won numerous trophies, money and several awards. He was very engaged with people of the trapshooting world for over 36 years, and made close knit friends thru out the years. He loved playing around with snowmobiling, road bikes, and ATA’s traveling around Montana, Washington, Idaho and Oregon. He loved to Hunt.  One hunting trip he spent a week in Canada (harvesting) geese. He enjoyed hunting deer, elk and bear on his family’s homestead. Lorry enjoyed hunting with his dad, brothers growing up. Later in life Lorry spent time teaching his (buddy) grandson David how to hunt and fish.  In 2009 Lorry buy his pontoon boat (his favorite toy) he spent every minute he could on the Snake river fishing for crappie and bass with buddy David, family and friends. One of his favorite trip was a 7 day Alaska cruise with friends Jim, June and Lois.  After retirement he enjoyed his morning coffee and tells fishing and hunting story’s with the guys at Summerville café. Lorry was avid sports fan; he never had a favorite team, because he watched them all. He enjoyed his gambling trips to Nevada and Wildhorse to playing Blackjack. (he was a good gambler, he told his friends.)

(One of his saying was; you need to cover the ground before it covers you) (He lived that kind of life.)

Lorry was a great husband, father, Granddad, brother, Uncle and friend.  (He made people laugh)

He lost his battle with cancer after 3 years. He requested no flowers, for those who would like to make a memorial donation to Lorry; the family suggest Imbler Rural Fire Department. Though Tami’s Pine Valley Funeral Home PO Box 543, Halfway Oregon 97834 PO Box 543 Halfway, Oregon 97834.  Online condolences may be shared at www.tamispinevalleyfuneralhome.com