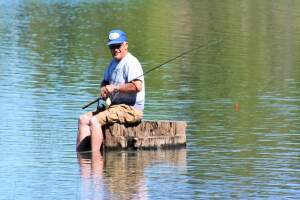 James “Henry” Spivey was born March 23, 1933 in Baker City, OR, the 9th out of 10 children.  He attended school at Tiedemann (south baker) grade school; Helen M Stack (Jr High School) and Central Bldg. which was the high school.  He left school in March 1951, and graduated with his GED in 1966.

Henry met Hallie Davis at a Christmas dance in Union, OR in December of 1950. They wrote letters back and forth because she lived in Pondosa, OR. It was true love, and 6 months later they were married on June 30, 1951.

Upon getting married, they soon moved to Izee, OR where he worked in the mill.  The family then moved to Kinzua, OR where he worked for Kinzua Corp Mill for 4 years before moving back to Baker to work for Burnt River Lumber Mill until the strike in 1971. He moved the family back to Fossil, OR then back to Kinzua while employed with Kinzua Corp Mill until he retired due to having severe tendinitis in both arms.

Following working at the mill, he delivered rural mail for Fossil, OR.  They returned to Baker residing in Wingville in 1979. Henry worked for the Baker City Airport as a maintenance man for several years.  They moved to Burns Junction, OR, in 1981 where Henry and Hallie both worked for the restaurant and gas station.  After that, Henry went to work for the Oregon State Highway Department at the Basque Station for 2 years when he was transferred to the Pendleton Highway Department working on the bridge crew. He officially retired in 1998 and permanently returned to Baker to live out the rest of his life and be closer to family.

Henry’s greatest rewards and enjoyment in life was teaching kids all the things he enjoyed while he was growing up.  Early in life he coached Little League and Babe Ruth baseball until he moved the family to Fossil, OR where he attempted to coach for one year. He was fond of sports and was a loyal fan to the Seattle Mariners and LA Rams. He loved archery and worked with many friends to build the archery course in Kinzua Or. Henry also helped build the archery course in Baker City up Washington Gulch and worked with many junior archers that are still shooting to date. Henry won the Oregon State Archery Champion in the 60’s and many golf tournaments. He was highly competitive and liked being challenged in anything he enjoyed which included golf, fishing, archery, card games, and out picking others in huckleberrying and mushrooming.

Henry fished every possible day until the last three weeks before passing.  He lived by the fishing motto, “Pretty flies catch people, ugly flies catch fish” and “Early to bed, early to rise, fish all day make up lies”. Henry shared the love of fly tying with many including his son, in laws, grandkids, nieces and nephews. It was a true passion of his that he talked about and actively instilled in anyone interested. One family member has even taken it to a professional level.  He also shared his love of coyote hunting; one family member has taken it seriously enough to create predator and other calls.  He shared his love of fishing & hunting with every one of his kids and grandchildren and that included his “in-laws”.

He inspired the love of the outdoors in his family which one family member has taken on as a career. Everything he did was fun- family activities and always a lot of joking and smack talking. He had a true love of family and friends. Everyone always commented on his smile and how much they loved it. In his competitive spirit, he truly enjoyed winning. His love and compassion was deeply instilled in all that knew him and loved him.

For those who would like to make a donation in memory of Henry the family suggests either the Alzheimer’s Organization or the American Cancer Society through Tami’s Pine Valley Funeral Home and Cremation Services PO Box 543 Halfway, Oregon 97834. Online condolences can be shared at www.tamispinevalleyfuneralhome.com.

To send flowers to the family or plant a tree in memory of Henry Spivey, please visit our floral store.

You can still show your support by sending flowers directly to the family, or by planting a memorial tree in the memory of Henry Spivey
Share a memory
© 2020 Tami's Pine Valley Funeral Home and Cremation Services. All Rights Reserved. Funeral Home website by CFS & TA | Terms of Use | Privacy Policy