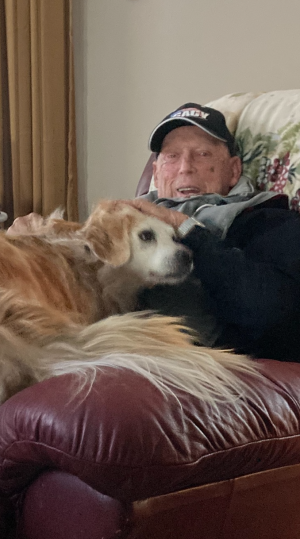 Donald Harvey Phillips, Don Phillips, age 90, was born on December 22, 1929 and passed away on Monday December 14, 2020; one week short of his 91st birthday.  He was proud of his Baker County roots where he was born and raised.  Don spent Sunday December 13, the day prior to his death, sawing, stacking, and burning a fallen juniper tree at Phillips Park before hurrying home to shovel snow at his residence.  The next morning, Don arose to shovel more snow before leaving to check his real estate in Baker City.  He passed away while doing what he loved.

Don was born at St. Elizabeth Hospital to William Harvey Phillips and Julia Mary Spriet Phillips.  He was the oldest of three children- a brother Leroy Phillips and a sister Joyce Bryan.  Don attended school at Pondosa, Pocahontas, and Union Elementary in Union, Oregon and graduated from the original Baker High School.  He was very proud to be an Eagle Scout and still has his uniform and badges.

When Don was 7 years old, he was riding a horse drawn farm implement with his father when he fell and damaged a bone in his arm.  His father and mother took extraordinary measures to save his arm by moving the entire family to San Francisco for a year so he could be treated at the Doernbecher Hospital.

Don acquired his work ethic early in life, delivering newspapers, digging potatoes, delivering milk and being a box boy.  In high school, Don worked for Emrich Furniture Company and Montgomery Ward before D.E. Clark recruited him to sell Fords.   Don eventually bought the business which became known as Phillips-Long Ford and sold cars from 1948 to 2002- (54 years selling Fords).  He took pride in caring for his customers and won numerous awards from the Ford Motor Company over the years.

Don loved this community.  He served on the Baker School District Board, donated cars for high school drivers’ ed classes, donated funds for new wrestling mats, tablets for Haines Elementary, and supported Baker High School Athletics.  He was a big fan and enjoyed attending Baker High School sporting events, even after all his grandchildren had graduated.  Don purchased Phillips Park which was once owned by his grandfather and returned it to a place where families could enjoy picnics, reunions, weddings, and company gatherings.  Baker School District students enjoyed outdoor school at the park for many years.  Nothing made him happier than sharing his park.

Don treasured his time with his family.  He and his son Dan, grandson Geoff, along with his brother Leroy, walked one end of the Elkhorns to the other following the tracks of his trapper dad.  Family and friends have fond memories of smore’s around the campfire, horseshoe tournaments, four-wheeler rides, fishing and swimming at Grandpa Don’s Park.  it was not unusual for holidays to include a visit from the real Santa, a flyover parachute-drop of easter eggs by Cliff Bond, and Easter Egg hunt for grandkids.  All of his family have fond memories of spending time with their father/grandfather.

He was preceded in death by his parents, son Daniel and an infant daughter Peggy Ann.

A celebration of life for Don will be held at Phillips Park late spring/early summer 2021, time and date TBA.  For those who would like to make a memorial donation in honor of Don the family suggests Doernbecher Children's Hospital through Tami's Pine Valley Funeral Home and Cremation Services, PO Box 543, Halfway, Oregon 97834.  Online condolences can be shared at www.tamispinevalleyfuneralhome.com

You can still show your support by sending flowers directly to the family, or by planting a memorial tree in the memory of Donald "Don" Phillips
Share a memory
© 2021 Tami's Pine Valley Funeral Home and Cremation Services. All Rights Reserved. Funeral Home website by CFS & TA | Terms of Use | Privacy Policy