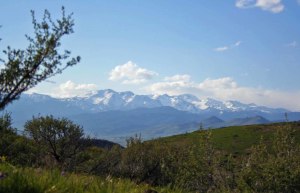 His true love was always horses. He started riding and roping as a young child and rodeoed for years as a member of the Professional Rodeo Cowboys Association.  He moved to eastern Oregon in the 70's and worked as a cowboy on many ranches and remote areas in the west. He was long-legged with a southern drawl and looked a lot like the Marlboro Man.  He was happiest living in the mountains with nothing but a herd of cattle, a horse, a good cow dog and some hot sauce in his saddle ("hot sauce will make anything taste good").  He had a special gift for training colts and he achieved his lifelong dream of raising his own line of American Quarter Horses.

His life was marked with several tragedies including the separate deaths of four of his five children, all at different times throughout his life. His cattle brand remained a symbolic tribute to them.  One day while gathering steers he was involved in a horse accident and almost completely severed his spinal cord. Unable to move or even breathe, he thought he was going to die but fellow cowboy Craig Loftin appeared suddenly and did CPR on him for 40 minutes until life flight could arrive, saving his life. He ended up paralyzed in the spinal cord unit of the VA in Houston, Texas.  One day he was miraculously able to breathe on his own and then could move his thumb.  It was all the motivation he needed. Through a lot of grit and determination he was the only patient to ever walk out of the unit and went on to have 18 more years of good health.

Corky was a straight shooter and spoke cowboy. He'd say things like "Never go back to the cull pen!" (don't second guess yourself) or if his kids tried to tell him what to do he'd warn "Never ride ahead of the boss!".  He delighted in being a grandpa and was very entertained by the many shenanigans of his grandchildren.  In the last month of his life he discovered during a surgery that he had cancer that had unknowingly spread throughout his body. He received so many visits and phone calls and messages from loved ones and was feeling so happy and supported. He even got to meet his new baby great grandson who is named after him.  His last morning at the age of 79, February 24, 2020, was spent with his wife Sandy of 30 years in their home in Halfway, Oregon. He was looking out the window at the mountains from his favorite spot in the living room with the sun shining on his face when he took his last breath. It was very peaceful and beautiful.

He is preceded in death by his parents Leo "Bub" and Goldie Brumnett and his four children Jane Brumnett, Leo Brumnett IV, Rebecca "Becki" Cantrell, and infant Travis Wade. A memorial for Corky will be held later in the summer.

For those who would like to make a memorial donation in memory of Corky, the family suggests the Hells Canyon Jr. Rodeo through Tami's Pine Valley Funeral Home & Cremation Services PO Box 543 Halfway, Oregon 97834.  Online condolences may be shared at www.tamispinevalleyfuneralhome.com

To send flowers to the family or plant a tree in memory of "Corky" Leo Wright Brumnett III, please visit our floral store.

You can still show your support by sending flowers directly to the family, or by planting a memorial tree in the memory of "Corky" Leo Wright Brumnett III
Share a memory
© 2020 Tami's Pine Valley Funeral Home and Cremation Services. All Rights Reserved. Funeral Home website by CFS