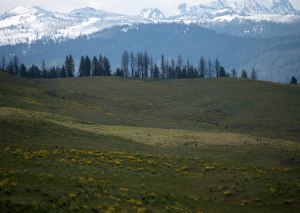 Charles “Charlie” Virgil Brown was born October 28, 1945 at Van Nuys, CA.  He moved to an orphanage in Portland, OR at 2 weeks of age.  When he turned  8 years old he moved to  Fairview State Hospital in Salem Oregon where he lived off and on until eventually moving to various group homes throughout Oregon.

In 1995 Charlie moved to the remote town of Fox, Oregon to live with Steven and Regenia “Dino” Valentine.  Although no one could have known it at the time, Charlie had finally found his forever family.
Charlie had to adjust to rural living, having only lived in populous areas.  Once he did, however, he learned to appreciate the simple joys of helping Steve feed cows, going fishing and on four-wheeler rides and, especially, a trip to town to get a hamburger and french fries.  After Fox, Charlie and his new family moved a few more times before ultimately residing in Richland, OR.

Charlie very much enjoyed traveling.  He could often be found going down the road with the “Yadies,” Dino and "Donno" (Donna Valentine).  Telling Charlie he would be going on a trip with the Yadies was always fun and his reaction was pure joy.  He also enjoyed taking a ride to the mountains to pick huckleberries or mushrooms.

With the Valentine’s came a large extended family and Charlie very much enjoyed their gatherings; he was known to everyone as part of the family. He had a very special bond with all of Steve and Regenia’s grandchildren who considered him “Uncle” Charlie.

As time went by and age became an issue for everyone, Charlie moved from Richland to Baker City where he lived in a group home owned by Step Forward Activities.  While it was a difficult transition for everyone it was also a blessing that he remained near so the family could still see him and take him for visits.  The staff of Step Forward did a wonderful job caring for Charlie and the family would like them to know it is deeply appreciated.

On July 3rd, 2020 at the age of 74, Charlie passed away with his favorite person in the world, Dino, by his side.  His passing has left a huge hole in our hearts but we are thankful for the time he shared with us. He left behind wonderful memories for us to carry with us and,  in the words of Charlie, we will …”See you next time.”

For those who would like to make a memorial donation in memory of Charlie, the family suggests Step Forward through Tami's Pine Valley Funeral Home & Cremation Services PO Box 543 Halfway, Oregon 97834.  Online condolences may be shared at www.tamispinevalleyfuneralhome.com

To send flowers to the family or plant a tree in memory of Charles Brown, please visit our floral store.

You can still show your support by sending flowers directly to the family, or by planting a memorial tree in the memory of Charles Brown
Share a memory
© 2020 Tami's Pine Valley Funeral Home and Cremation Services. All Rights Reserved. Funeral Home website by CFS & TA