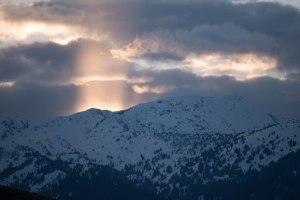 Alan King, 80, of Baker City, went home on January 16, 2020, after a brief illness. A Memorial Service will be held on Saturday, February 1, 2020 - 2:00 p.m. at the Baker City Church of the Nazarene.  A reception will be held immediately following at the church.

Alan was born in San Bernardino, California, on February 28, 1939 to Bill and LaVere King. He grew up in the small community of Adelanto, California helping his parents and siblings raise chickens and being a typical boy, loved the outdoors. Thank goodness he never actually grew up, and he was referred to as "The World' s Oldest 15 Year Old" on more than one occasion! After graduating Victor Valley High School in 1957, he enrolled at both Chaffey and Biola College and played competitive water polo. He soon realized that college life was not for him. He joined the Forest Service/Hot Shot crew helping put out fires before deciding to pursue the one thing he'd always dreamed of doing, driving trucks.

His whole life he was obsessed with ALL things trucks and would do anything he could to share his passion with long wheelbase Peterbilts! In his career as a driver, his trucks were used in numerous advertisements and even in the pilot episode for the TV show "The Rockford Files" because they were so impeccably cleaned. He also amassed a total of over 5 million driven miles! He loved hunting, fishing, reading Louis L'amore books and working outside keeping his home in perfect order. He proposed to Lynda and was married for 55 years (producing three amazing kids!) until the Lord called her home. He was one of the fortunate ones who was able to find love twice and found his equally amazing wife Myrna (They were BOTH introduced to him by the same great friend!) who provided almost two years of laughter and constantly keeping him on his feet.

He was preceded in death by his son Sean and his sister Joy.

Alan leaves behind his wife Myrna, his brother Jim (Debbie), his children Brad (Vickie) and Stephanie (Eric), and grandchildren Brittny, Alissa, Connor, and Madalynn, along with great grandchildren Meira, Milo, and Wyatt.

For those who would like to make a memorial donation in memory of Alan, may do so to Missions-McEwen Church through Tami's Pine Valley Funeral Home & Cremation Services PO Box 543 Halfway, Oregon 97834.  Online condolences may be shared at www.tamispinevalleyfuneralhome.com